• match the graph of a piecewise-defined function with its equation.

Ex. Determine the equations of the piecewise-defined function whose graph is
given below, along with their respective domain 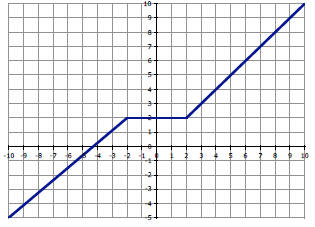 • find the multiplicity of the real zeros of a polynomial function
Ex. find all the zeros of the function y = x4 −13x2 + 36 and state their
multiplicities.

• match the graph of rational functions with their equation.
Ex. Which of the following equations best matches the given graph?

Ex. The function f(x) has the same graph as the one of y = 2x but shrunk
vertically by a scaling factor of 1/2, then reflected about the x-axis, and then
shifted down 4 units. What is the equation of f(x)?

• match the graphs of such functions with their equations.
Ex. The sketch below is that of which function?

• match the graphs of logarithmic functions of the form:

Ex. Which graph could be the one of

• apply the properties of logarithms to evaluate or simplify logarithmic expressions
Ex. Express as a single log and simplify:

P. Translate from Degrees into Radians (or π-radians) and from Radians into Degrees

• Use the sum, difference, half-angle and double-angle formulas to determine the trig
ratios of other angles.
Ex. Without a calculator, evaluate sin(π/6).

Ex. Describe the graph of

as compared to the graph of
y = cos(x) using rigid &/or non-rigid transformations. In the same coordinate
plane sketch the graph of y = cos(x) and that of

Ex. Describe the graph of

as compared to the graph of
y = sin-1(x) using rigid &/or non-rigid transformations. In the same coordinate
plane sketch the graph of y = sin -1(x) and that of